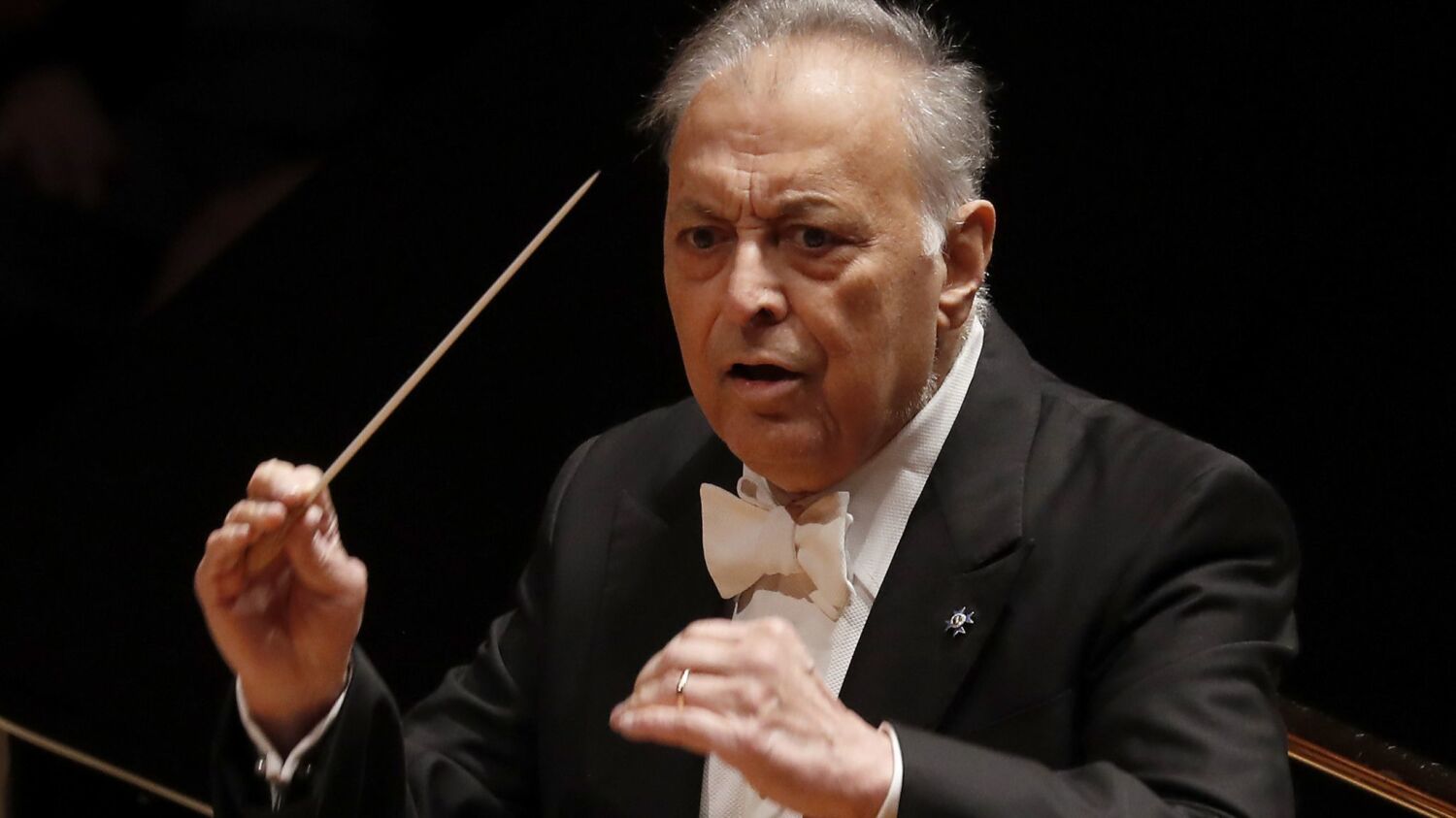 In January 1961, a glamorous 24-year-old Zubin Mehta, who was already taking classical music by storm, made his West Coast debut with the Los Angeles Philharmonic.

Included in those L.A. Phil programs was Webern’s Six Pieces for Orchestra, Opus 6. Enthralled, Times critic Albert Goldberg wrote that by persuading the public to like this music, Mehta had accomplished “a singular achievement.”

One singular achievement led to another. A year later, Mehta became music director of the L.A. Phil, the youngest ever of a major American orchestra.

Now, 59 years later, as conductor emeritus of the L.A. Phil, Mehta has done it again. Mehta seemed to get the public at Walt Disney Concert Hall on Saturday night to like this important early 20th century score of music reduced to pure, enchanted atmosphere. Its tiny wisps of melody, minimal sound effects and harmony more implied than revealed stirred surprisingly large and lasting emotions.

Had the many who fled Disney Hall before the Webern stayed, they might have been engrossed. But they had presumably come for other reasons: There were excerpts from the last of Wagner’s “Ring” operas, “Götterdämmerung,” on the first half of the program. Soprano Christine Goerke, America’s favorite Brünnhilde, was the soloist. This offered the kind of breathtaking sonic spectacle that Mehta has always been known for.

But being Zubin Mehta has always been, and now more than ever remains, Zubin Mehta’s singular achievement. His reputation has had its ups and downs. In his 16 years as music director of the L.A. Phil, he brought flash and vitality to it. He was then accused of bringing flash and vitality at the expense of serving an art form, although that art form and the orchestra Mehta played a key role in fashioning have managed to survive well enough to make L.A. the orchestral envy of the world.

Mehta went on to lead the New York Philharmonic for 13 controversial years. He just completed 50 years (first as music adviser, then as music director) with the Israel Philharmonic, making him a cultural hero in the country. He has had a distinguished operatic career in Europe. But L.A. has remained his residence for six decades. He came home two years ago for cancer treatment and surgery. He made his comeback here last season — frail, not entirely focused, but deeply inside Brahms in a way he had never before seemed. No flash, just substance.

Now, stronger, he appears to be more his old self and at the same time a new self. In a magnificent performance of Mahler’s Second Symphony the first weekend of the year, and in his majestic Wagner, Webern and Schoenberg program this last weekend, he achieved grandeur without the grandiosity. He shows how it is supposed to be done.

Mehta has, of course, long been a bedazzling master of orchestral sound, sometimes accused of making that the end all and be all. But there is also the Mehta whom soloists adore for his ability to anticipate and support their every move. In opera, he puts both together, and he has a way of serving drama in the process. He is too seldom given credit for his ability to work with imaginative directors; last spring, he conducted a Robert Wilson production of Verdi’s “Otello” with the Berlin Philharmonic in Baden-Baden, Germany.

In his Mahler and Wagner, Mehta simply asked the orchestra to be all it could be. Mahler’s symphony, known as the “Resurrection,” sounded as if it were Mehta’s own resurrection from ill health when he led it in October as part of the L.A. Phil’s gala 100th birthday weekend, and it spectacularly did so again at the Sunday matinee performance I heard.

Hers revealed a confidence at the world’s end, which is its Wagnerian fate, and its potential of rebirth. A production of the opera in Valencia, Spain, that Mehta conducted a decade ago represented the world as we know it mired in an environmental catastrophe, cyclic renewal less optimistic. In many ways, Mehta’s curiously daring L.A. program had that kind of embedded symbolic wonder as well, its theme perhaps orchestral conservation.

After intermission, Mehta cut the orchestra down drastically for Schoenberg’s First Chamber Symphony, a work he was also the first to conduct (and to record) with the L.A. Phil. Played with luxurious richness, it was a sonic spectacle done with less. The Webern Six Pieces that followed may have once more upped the orchestra size, but instruments were used with such restraint that not a note was wasteful.

For the final work, Webern’s Concerto, Mehta radically whittled down the ensemble to a mere nine instruments. Webern dedicated the 1934 score to his teacher, Schoenberg, on his 60th birthday. The elder composer had just emigrated from Berlin to L.A. to flee the Nazis. Webern remained behind, surviving World War II but not its aftermath, accidentally killed in 1945 by an American soldier occupying Vienna, when the composer stepped outside one evening to smoke a cigarette.

The Concerto, in three very short movements, is exquisite escapism, a 12-tone work made with jewel-like precision. As the world was turning Holocaust-ward, Webern looked to nature for inspiration, to the diamond perfectionism of rocks and the wonders of anatomy. He too felt that nature could survive the worst of ills to which it was exposed. That even this concerto for nine instruments, none hardly ever playing more than three notes at a time, could make an ecological investigation to the essence of music appear as its own kind of sonic spectacular is, that’s right, a singular achievement.